Do You Say Yes Too Often? – Creating Value

We often say yes to people because of who they are and not what the request is. Sometimes you just have to say yes. And then there are other times where a little thought before saying yes would be a good idea.

Our problem is we don’t have enough time.

I would love to say yes to every request I ever get. They always sound interesting and at some level I think I can help when I’m asked. It’s also very gratifying when someone asks me to help.

The problem that I have and I bet you do also is you don’t have enough time in the day to do everything you want. You have lots of people asking you for your input and too often once you volunteer your ideas you’re also saying you’ll spend time on the project. Time you probably don’t have.

I have one thing to say to you, and it’s “Stop it.” Stop volunteering for things when you know you can’t or don’t want to really do.

Think about who is asking you and if there is another way.

Sometimes your boss will ask you to do something where you just can’t say no. Yes, I understand that’s what happens at work.

If you feel like you’re being asked to do just too many things you have to find a way to not say yes. You might want to suggest a different way of getting to the same outcome. A way that doesn’t involved lots of your time.

You might want to offer your boss a list of things you need to do and ask them which ones can wait. Often your boss might not even know how many things are on your plate.

You can only work so much and be effective

If you’re working more than fifty hours a week this is a really important thing for you to handle. Research has shown that when you work more than fifty hours, you might as well stop. You’re just making too many mistakes. It’s the mistakes that can cost you and your company a lot of money and trust. You really need to learn to say no or not yet.

Sometimes you have to say no to gain respect.

Sometimes I have to be willing to lose if I’m going to win. What I mean by this is if I’m not willing to lose an account or stop working for someone I’m always at their mercy, no matter how unreasonable the request is.

If you’re not willing to lose whatever you’re scared of losing you will always feel too much pressure and have too many things to do. It takes bravery to say no. You have to be willing to accept the worst. In my experience, the worst rarely happens. Most of the time I get new respect for being willing to “lose”.

Does saying yes move you forward?

This is the big question. Do you have goals that you keep track of? Do you know what you want to accomplish in life, your business, your job, or your family? If you don’t then you’re likely to say yes when saying no would serve you better.

Understand what’s important to you. Always ask yourself whether saying yes helps you move forward. If not, say no so you have time to say yes.

We have a special report on relationship and roles in your business. If you understand what role you’re playing it’ll be easier for you to say yes or no when asked. 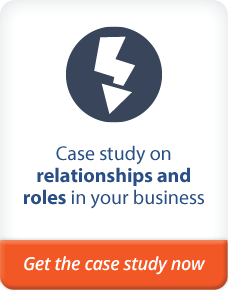